I met Chuck over 30 years ago when we were both in high school here in the valley. We met on the basketball court as opponents. You see, Chuck attended what was probably the most athletically talented school in the valley, Rancho High School. I attended a school at the other end of the spectrum. Despite being opponents twice a year, we had a chance to play as teammates in a tournament in Texas. We developed what I would call mutual respect for one another after that, then friends.

After a successful high school career, where he participated in basketball, football and track, Chuck did the same in college. Eventually, basketball and track gave way to football in his senior season. That was a pretty good decision if you ask me. Chuck went on to play in the Canadian Football League and Arena Football for a total of seven years!

After his stint in pro sports, Chuck decided to come back home to Vegas. Who wouldn’t? When you consider what this city has to offer beyond the glitz and glamor of the strip, Las Vegas served as the perfect place for Chuck to start his second career.

Chuck went to work on getting certified in personal training. With that new certification in hand, he decided to go to a location rich in history here in Las Vegas. Doolittle Community Center in west Las Vegas. There he would hold free classes for anyone looking to get into better shape than their current physical fitness levels. West Las Vegas, aka, The West Side, isn’t known for its plethora of personal trainers. Let alone a certified, ex-pro athlete to boot. But that precisely what Chuck was, and he was offering free group sessions at Doolittle, and this largely black community! As his groups became more massive, he received requests for one-on-one sessions from friends and acquaintances. And of course, Chuck obliged.

Chuck’s nucleus of clients gather Saturday mornings at 7:30 at Centennial Hills Park in the northwest part of the Valley. A smaller group meets at Sunny Springs Park just up the street every Thursday evening. When not doing group sessions, he provides individual personal training sessions to other clients throughout the week.

So there you have it. A local kid, who worked hard and became a pro athlete. Returns home to teach what came naturally to him, to the masses for the betterment of their lives.

Chuck is still small in the larger scheme of things and is looking to grow his customer base. He has an instagram page that he uses to showcase his work and his clients’ successes. He’s a family man, a great father, and an incredible athlete. OH! He’s a pretty darn good trainer too!!

To join a group session or if your more inclined to have the man all to yourself, reach out to him on his instagram page.

Well, I think that’s pretty compelling Vegas’s Local Business of the Week candidate if I ever saw one. For past businesses of the week musings about our great city, check out our blog here !

Never miss a thing in Vegas!

Let us keep you in the know! Receive updates of information and things to do during your stay at home and other COVID details delivered straight to your inbox weekly! 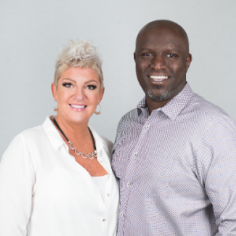 Connect with us on:

Copyright 2019 Keller Williams® Realty, Inc. If you have a brokerage relationship with another agency, this is not intended as a solicitation. All information deemed reliable but not guaranteed. Equal Opportunity Housing Provider. Each office is independently owned and operated.